It is 30 years to the day since the craziest Merseyside derby of modern times. A 4-4 draw in an FA Cup fifth round replay that saw a shattered Kenny Dalglish step down as Liverpool manager.

Dalglish maintained he could have returned, recharged, two weeks later but some argue it took Liverpool years to fully recover.

‘None of us had any inclination that Kenny would quit,’ says Liverpool legend Ian Rush. ‘The game was unbelievable. For us to go ahead four times and not win, we were upset but Everton wouldn’t give up.’

Lying on his hotel bed that day, Dalglish had decided the Goodison derby would be his last in charge for the sake of his sanity. Over 20 years at the top, coupled with the trauma of Hillsborough, had taken their toll. He was questioning his own decisions.

‘Kenny was terrific for protecting players. He would take all of your problems away,’ reflects Rush of his friend and former strike partner. ‘That’s why he was such a great man-manager. He’d say ”leave your worries with me, you just go out and play”. The trouble is he took on so many players’ problems at that time that it became too emotional for him to do his job. He kept it all to himself.’

Rush, so often Everton’s nemesis, had triggered the drama that night, breaking down the left before his parried shot fell to Peter Beardsley to convert the opening goal after 37 minutes. Graeme Sharp equalised after half-time only for Beardsley to add a brilliant second past Neville Southall. Sharp levelled again before Rush added his customary goal with a rare header to make it 3-2.

‘I was good friends with Kevin Ratcliffe, we used to room together with Wales and we’d have banter going on through the games. But he used to kick me really hard early on and I said ”What did you do that for?” He’d say it was because the referee wouldn’t dare book him at the start of a game. It happened that often that in the end I’d run to the ref and say ”Hey, you know it’s still okay to book someone in the first five minutes as well as the last?”

‘I was always confident in derbies and, knowing Neville Southall the way I did, it was all the sweeter to score against him. Neville was the best goalkeeper in the world, though he never really had the global recognition he deserved. That night I just read where Jan Molby was putting his cross and got my head to it.’

Rush’s strike had looked conclusive only for Everton substitute Tony Cottee to force extra time. John Barnes curled a majestic shot beyond Southall’s reach to put Liverpool in front once again only for Cottee to send Goodison into raptures with a fourth equaliser, earning another replay.

‘We scored some great goals but made silly mistakes,’ said Rush. ‘Against any other team, we probably would have won but to their credit Everton kept coming back. Kenny wasn’t happy after the game, none of us were but there was no sign of what was coming.’

Dalglish would later cite that a sign of his fatigued state was when he knew he should have shored up Liverpool’s defence after Barnes’s goal but failed to act.

‘The Friday morning after that derby, we were in the dressing room and Kenny came in with tears in his eyes and said he was leaving,’ says Rush. ‘It was all very emotional. He was only there a couple of minutes, said thank you to everyone, then left. I was close to him, I had no idea, we were all in shock.

‘We lost to Luton that Saturday and started feeling sorry for ourselves. I blamed the plastic pitch and the fact we’d changed our preparation. We wanted Kenny back, he was the one we turned to when we were down, ”what do we do now?” Ronnie Moran just hammered us all and said ”get on with it”.’

It was Everton though who went on to win the replay.

Does Rush now draw parallels to that era with the pressure Jurgen Klopp finds himself under following his recent blip?

‘It’s rubbish to question Klopp,’ says Rush. ‘The standard he has set is the reason he gets such scrutiny when they lose. The manner in which they won the league probably won’t be repeated. But it’s ridiculous, the criticism is worse now than in Kenny’s day. One or two defeats and it’s a crisis. They’re not playing that badly.

‘As Kenny, and Bob Paisley before him, always used to say, the hardest part is retaining the title and this is the toughest league in the world. 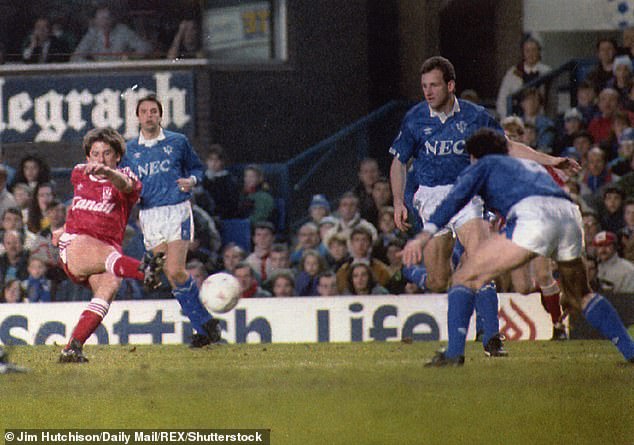 ‘Liverpool had a lot of good managers in between. I was very happy with Graeme Souness, who brought in training methods from Italy ahead of their time, but the dressing room struggled when he changed too much too quickly.

‘Gerard Houllier and Rafa Benitez maybe put more emphasis on European competition but they all took a step in the right direction. Klopp has raised the bar and success attracts criticism, but he can handle that.’

Research from 888 Sport shows that despite their recent poor home form, Liverpool haven’t lost a Saturday game at Anfield since January 2017, against Swansea. Additionally, Everton still haven’t won at Anfield since 1999.

‘Liverpool have been missing crowds more than anyone,’ says Rush, who scored a record 20 derby goals. ‘Pep Guardiola admitted as much after City beat Liverpool the other week. Anfield was always a 12th man and that could make a massive difference on Saturday.

‘On the Tuesday before derbies you’d have 100 fans outside Melwood training ground saying ”Come on lads”, by Friday you’d have 1,000 saying ”make sure you beat them”. You were made aware what it meant. Without the fans, the games aren’t as ferocious but the team that is the best mentally prepared will win.’

Rush fancies Liverpool to have that edge and triumph 3-1 but is wary of the threat posed by Everton’s Dominic Calvert-Lewin.

‘He’s done really, really well. He’s had a hamstring injury so I’d like him to miss this game too …but he’ll believe he can score against Liverpool.

‘Even when I went to Newcastle, I scored against them. It’s amazing the psychology you have as a striker and I think Calvert-Lewin has that same mentality. But hopefully Liverpool will have a little bit more.’

BROUGHT TO YOU BY SEVENTY8 SPORTS TRADING LTD.

TO RECEIVE THE LATEST
ON NEWS & EVENTS

BROUGHT TO YOU BY SEVENTY8 SPORTS TRADING LTD.

TO RECEIVE THE LATEST ON NEWS & EVENTS

KEEP UP TO DATE WITH THE LATEST NEWS & EVENTS

Drop us a line